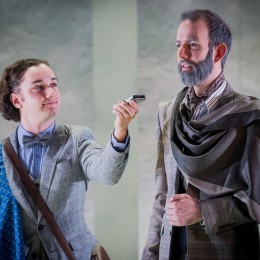 ‘The plot is perhaps the least moral in all opera; wrong triumphs in the name of love and we are not expected to mind.’

John Ramster’s production of Monteverdi’s L’incoronazione di Poppea, performed in Shoreditch Town Hall by Royal Academy Opera, is a brilliant illustration of Raymond Leppard’s pithy summary. Updating the opera to a generic ‘present’, Ramster sets out to impress upon us that this ‘shocking story of a psychopathic despot and his gold-digging mistress [is] so fresh and current that it could be taken from a sensational novel set to be published next month’.

With their Marylebone home currently undergoing major renovation and re-design, the singers studying on the Royal Academy Opera programme find themselves nomadic, and Shoreditch Town Hall is their fourth temporary home, after performances at Hackney Empire, the RADA Studios and Ambika 3 ( May Nght). Built in 1865, and with a heritage as one of the grandest Vestry Halls in London, the venue was established as an independent arts and events venue in 2004. With its high ceilings, Italian marble panelled walls and Matcham style balcony the Assembly Hall certainly evokes the soon-to-fade glories of Imperial Rome, but the room presents some challenges — not least the proximity of the motorbikes and buses which can be heard roaring through this regenerated and ‘hipsterfied’ hotspot.

Designer Louis Carver does well to overcome the potential acoustical and sight-line problems. He confines the action within a raised white cube, the back-wall of which presents the shimmering blue and green plumage of a peacock, its head turned to admire its own beauty. It’s a fitting image of Roman pomp and pride, not least because the peacock’s meat and tongue were a favourite Roman gastronomic delicacy and the bird’s glorious feathers were a common decoration in mosaics and frescoes. But, more than that, Roman mythology endowed the peacock — created by Juno from Argus, whose hundred eyes symbolize the vault of heaven and the ‘eyes’ of the stars — with the power to ‘see everything’, and here the tail feathers create an air of tense ‘watchfulness’.

The protagonists — and there are a lot of them in Francesco Busenello’s libretto — enter through apertures in the peacock’s tail and side walls, and the stepped platform which raises the singers aloft emphasises both the hierarchies of the heterogeneous Imperial court and the courtiers’ propensity for self-adulation. Though Monteverdi’s opera retells the story of Poppea’s rise to the throne, it is more concerned with the psychological development of characters who represent a wide range of temperamental aspects of humanity, and whose complex and increasingly intense interactions raise timeless moral questions.

Ramster and Carver make the connections and convergences clear, and the complexities are unified by Jake Wiltshire’s vibrant lighting. Turquoise, emerald and purple consolidate the affections portrayed, deepening to blood-red at the end of each act, as first Seneca welcomes the violent death that awaits him and then Nero and Poppea glory in their supremacy. Michelle Bradbury’s costumes blend the majestic with the mundane — there’s a lot of checked cloth, and some clownish pantaloons for Amor — while the Tyrian purple sported by various soldiers, senators and servants reminds us of the historic setting.

The opera begins with a Prologue which makes clear that the action we are about to witness is the result of a three-way dispute between the goddesses of Fortune (Slovenian soprano Nika Gorič), Virtue (mezzo soprano Katie Stevenson) and Love (soprano Alys Roberts), which leaves the latter victorious. The three singers introduced themselves feistily, their bright, clear voices establishing a confidence and sense of entitlement which was shared by the audacious mortals whose fates they design. Fortuna and Virtù’s duet ‘Human non è, non è celeste cor’ was refreshing and lively, while Roberts’ crisp clarity confirmed her utter conviction that the crown is hers and the World will change direction at her bidding. The goddesses then settled down to view the salacious spectacle from the sides of the stage. And, what a roll call of mortal dissipation, depravity and decadence the seventy-five-year-old Monteverdi conjures in this, his last, opera.

We know, from Monteverdi’s correspondence, that the composer exerted a strong influence on the form and character of the text, persuading Busenello to add scenes and characters and, most importantly, to give pride of place to the human affections. The year before Poppea was performed Monteverdi’s Le Nozze d’Enea con Lavinia was presented in the same theatre, the Teatro Santi Giovanni e Paolo in Venice, and while the score is lost the Argomento in Badoaro’s libretto contains its author’s remarks: ‘I avoided all farfetched thoughts and conceptions and paid more attention to the affections as Monteverdi wished to have them’.

Similarly, in Poppea the real ‘subject’ is man and his ‘affections’. Ramster and his young cast presented the characters with striking intensity and realism, giving us a wonderfully concentrated drama of human passions in conflict.

At the centre of this conflict are the deluded Emperor and his adulterous mistress. As Nerone, Canadian Eve Daniell used her powerful soprano with skill, control and good judgement. Her voice is silkily rich, and as agile at the top as it is secure and full at the bottom. Its clarity and beauty were piquantly at odds with Nerone’s intentions. The appealing, bright sound communicated the Emperor’s misguided optimism and assurance, as well as his immaturity. Daniell captured the despot’s absolute self-absorption, posing and strutting with the preoccupied narcissism of a modern-day reality-TV contestant. The soprano was excellent in the rapid dialogue — indeed, the cast’s Italian diction was uniformly idiomatic — and vibrant in the stile concitato episodes, as in Nerone’s violent quarrel with Seneca; while the florid passages, such as the duet with Lucano (William Blake), were nimbly executed.

Emma Stannard was a veritable vixen as Poppea, viciously feline and ruthlessly egocentric. Her mezzo soprano is magnificently rich and full, and she knows how to control it — just as her Poppea knows how to get what she wants. The first duet for Nero and Poppea flowed with intoxicating sensuousness, though Ramster’s ‘gimmick’ — the lovers sang their spicy ‘sweet nothings’ into their mobile phones, Nero pleasuring himself while Poppea callously toyed with the desperate Ottone — grew tiresome after a while.

Patrick Terry’s Ottone, returning from the remote regions whence he has been despatched by the calculating Nerone, was a portrait of tentative hope and confounded misery, superseded by violent vengeance. The countertenor struggled to project the more low lying passages in this opening number but he was moving as Poppea’s spurned lover, and agile in in the melismatic word-painting, ‘Sogni portate a volo’ (Fly my dreams, into hers). Ottone’s later monologue, in which plans to murder Poppea was affecting, conveying both pain and implacable wrath.

I was impressed by Claire Barnett-Jones’s Ottavia: ‘Disprezzata Regina’, in which Nerone’s neglected and rejected spouse swears vengeance, was a convincing, burning portrait of an aggrieved wife and wronged womanhood. The mezzo soprano showed control and flexibility in the short phrases which convey Ottavia’s changing moods and ‘A Dio Roma’ was full of pathos.

I had admired Barnett-Jones in British Youth Opera’s production of Holst’s Riders to the Sea ( review), writing that ‘Barnett-Jones’s declamation was grave and transfixing, taking us compellingly through the inexorable journey, and submission, to death; she sustained the vocal and dramatic intensity through her long monologues … Barnett-Jones is clearly a young singer to watch’. Her performance as Ottavia certainly confirmed this.

Timothy Murphy lacked the strength at the bottom necessary to convey Seneca’s astonishing dignity, but the Irish bass baritone showed a good sense of musical line when espousing his quiet philosophy in his scene aria with Ottavia, and when renouncing all worldly desire and accepting his fate. Warned by Pallade (Nika Gorič) of his impending death, Seneca knelt calmly and welcomed his ascension to the heavens, ‘Venga, venga la morte’, the deep red glow behind him, which sank into blackness, ominously embodying his decease and destiny.

Arnalta’s tender lullaby was beautifully sung by Helen Brackenbury, and her mezzo contrasted effectively with Stannard when the Nurse cautioned her mistress of Ottavia’s jealousy. Spanish Lorena Paz Nieto exhibited a thrilling shine to her soprano as Drusilla. Laura Zigmantaite (Valletto) joined with Alys Roberts’s Damigella for a delightful duet which was a refreshing moment of sincerity in an opera drowning in deceit.

Conducted by Jane Glover, in her last performance as the RA’s Director of Opera, members of the Academy’s Historical Performance department accompanied the cast, the instrumentalists moving stylishly and naturally through Monteverdi’s diverse forms and idioms. The bass playing from cellists Anne-Linde VIsser and Tabea Debus, alongside double bass player Marianne Schofield, was particularly impressive: unobtrusive yet decisive.

The final all-conquering duet for the crowned lovers, ‘Pur ti miro, pur ti godo’, was ecstatic and sweeping. Ramster had a twist in store for us, though. The Monteverdi scholar Leo Schrade declared that ‘at the close Poppea is the incarnation of love, and love Nero’s destiny’, and it does seem as if lust, passion and ambition have won the day. However, as Ramster reminds us, ‘This Union of Love and Ambition is a mere snapshot, a moment in time, for all that it appears to be happy-ever-after’. So, as Nerone and Poppea welcomed the admiring congratulations of their court, Amor, squeezed between them, slumped to the floor — his victory an ‘empty’ one, as symbolised by the space between the two lovers. Violence is the true victor here — Nerone will kill his empress — as a pistol-pointing soldier behind the regal pair reminded us.

In his writings, Busenello praised Monteverdi as the man who brought music in general, and dramatic music in particular, to perfection — a musician whose art is immortal. Who, after this tremendous performance, would disagree?