Design and create the official video for Enjoy the Silence 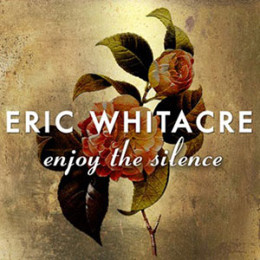 Eric Whitacre, one of the most popular and performed composers of our time, wants you to make the official music video for Enjoy The Silence, from his new EP album.

The brief is completely open to interpretation, so take a listen, be inspired by this amazing choral composition and get creative!

The winner will receive $4,000 and have their video used as the official music video for Enjoy The Silence.

Outstanding videos will also be nominated for the 2013 Genero Awards and in the running for $50,000 in awards.

The winner and finalists will be chosen by Eric Whitacre and Genero.

‘Whitacre is that rare thing, a modern composer who is both popular and original’ – The Daily Telegraph, London

Eric Whitacre is one of the most popular and performed composers of our time, a distinguished conductor, broadcaster and public speaker. His first album as both composer and conductor on Decca/Universal, Light & Gold, won a Grammy® in 2012, reaped unanimous five star reviews and became the no. 1 classical album in the US and UK charts within a week of release. His second album, Water Night, was released on Decca in April 2012 and debuted at no. 1 in the iTunes and Billboard classical chart on the day of release. It features seven world premiere recordings and includes performances from his professional choir, the Eric Whitacre Singers, the London Symphony Orchestra, Julian Lloyd Webber and Hila Plitmann. His compositions also feature on multiple other recordings made in Europe, North America and Australasia.

His ground-breaking Virtual Choir, Lux Aurumque, received over a million views on YouTube in just 2 months (now 3 million), featuring 185 singers from 12 different countries. Virtual Choir 2.0, Sleep, was released in April 2011 and involved over 2,000 voices from 58 countries. Virtual Choir 3, Water Night, received 3,746 submissions from 73 counties and launched at Lincoln Center, New York and revealed online in April 2012. The latest, Virtual Choir 4: Fly to Paradise, released in July 2013, received over 8,400 submissions from 101 countries and launched at the Coronation Festival at Buckingham Palace/BBC 1.