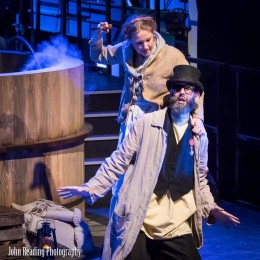 Rimsky-Korsakov’s Boris may have been consigned to the dustbin of history — I have seen it only once, when the Bolshoi brought its dusty 1948 staging to the Coliseum in the late 1990s — but his enchanting operas are long overdue for revival. The Royal Academy of Music staged Mayskaya noch’ (May Night), excellent in almost every respect, in the week before Boris opened, and I wouldn’t have missed it for the world. Gogol’s story is of a young man thwarted in his amours by his randy father, his cronies and his dead stepmother (a witch who leads a vindictive horde of rusalki, women who have drowned themselves because of unrequited love).

The plot might strike modern audiences as silly, but Rimsky’s score is a gem, and the RAM did it proud under the confident baton of its new music director, Gareth Hancock. There wasn’t a weak link among the singers, all of whom deserve to be singled out, but I can’t omit Mikhail Shepelenko’s small-voiced yet idiomatic Levko, Emma Stannard’s bright, feisty Ganna, Timothy Murphy’s strong-voiced, lustful mayor and Claire Barnett-Jones, hilarious as his roly-poly sister-in-law.